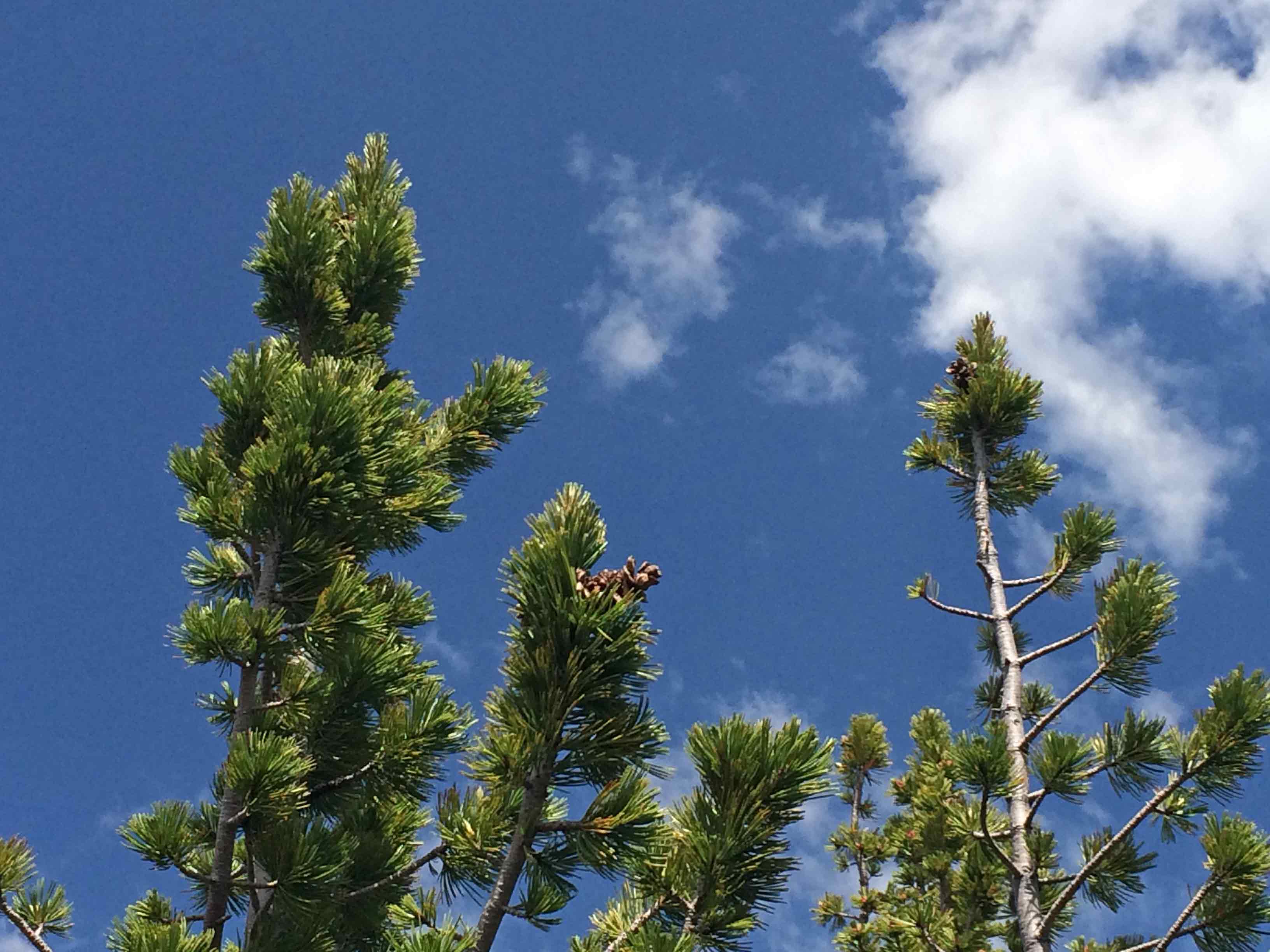 Predicting responses of whitebark pine to projected climate change and restoration actions is quite complicated involving consideration of complex ecological interactions at multiple spatial and temporal scales.  Climate warming, for example, may foster more high elevation fires that burn more whitebark pine forests, provide additional sites for nutcracker caching, and promote future regeneration. However, fires may also kill trees that are genetically resistant to WPBR thereby reducing regeneration potential and future adaptation to the rust.  This complexity precludes traditional approaches for evaluating climate impacts, such as expert opinion, statistical modeling, and field experiments, because of the long time spans and large areas needed to properly assess vegetation, disturbance, and ecosystem responses to changing climates. Mechanistic ecological simulation of climate, vegetation, and disturbance dynamics in a spatial domain may be the best approach to evaluate the likelihood of potential ecosystem trajectories at this time even though the field of landscape modeling is still in its infancy.

Taking an historical perspective, whitebark pine was able to persevere through many major climatic cycles in the past. Historical analogs of warmer climates in the paleoecological record indicate whitebark pine was maintained and even increased in some places under past warmer and drier climates in some parts of its range. Whitebark pine can grow within a broad upper elevation zone in the west; the pines just happen to grow best at high elevations where there is little competition from other tree species. In fact, studies have shown that whitebark pine’s elevational range extended over 500 feet below its current lower elevation limit in the Bitterroot Mountains of Montana. Whitebark pine occupies the largest geographic range of any five-needled white pine in the U.S. and Canada, including about 18˚of latitude and 21˚ longitude, indicating a great deal of tolerance to different climates. Because whitebark seeds are bird-dispersed, it is planted and has the potential to grow in many environments where it may not currently exist. Moreover, the fact that it is long-lived provides the potential buffering against changing climates; periodic regeneration success over the lifespan of centuries-old trees maintains populations during periods of less optimal climates.

Whitebark pine trees may have other positive responses to warming climates. Anecdotal evidence shows that some whitebark pine forests are experiencing abnormally high growth and more frequent cone crops due to warmer summers and longer growing seasons. This is supported by recent modeling efforts that have shown that whitebark pine might be maintained on the landscape providing that predicted increases in large, stand-replacement fires create large, competition-free burned areas. And, if tree dispersal enables range shifts to occur, this will lead to a new northern distributional range. Moreover, whitebark pine also shows promise for being maintained in the Northern Rockies because of high levels of genetic diversity; moderate to high heritability in key adaptive traits demonstrated blister rust resistance; minimal inbreeding; and generalist adaptive strategies.

Climate-induced changes in disturbance regimes will overwhelm most vegetation responses to climate change. Many climate change studies consistently project drier conditions in the range of whitebark pine and that will result in large increases in the annual number, area burned, and severity of wildfires. With increased fire, whitebark pine will have a unique opportunity to maintain its range or even increase in distribution in the future because it has bird-mediated (Clark’s nutcracker) seed dispersal that can disseminate seed great distances into the large, severe burns predicted in the future. Under this scenario whitebark pine seeds would have the opportunity to colonize newly burned sites with reduced competition from wind-dispersed species that would have a lower likelihood of landing within large, burned perimeters. Whitebark pine is a fire-adapted species that readily regenerates in large burned areas and has morphology that enables it to survive low to moderate severity fires. Therefore, whitebark pine is uniquely positioned as a species that can increase under the more frequent fire regimes that result from warming climates provided that future fires do not severely diminish existing seed sources. And since nutcrackers may be harvesting seeds from trees that have survived blister rust, there is some chance that seeds from unclaimed nutcracker caches may become blister rust-resistant trees. It is entirely possible that as long as wildland fire creates areas where birds will cache seeds and resultant seedlings can grow without competition, whitebark pine will continue to thrive throughout its range.

Current mountain pine beetle outbreaks are killing more whitebark pine than historical records indicate and these outbreaks are probably a result of warmer winter temperatures that facilitate expansion and establishment of beetle populations in the higher-elevation whitebark pine zone (Logan and Powell 2001, Logan and others 2003). A warmer climate may also accelerate the spread of blister rust.

In summary, whitebark pine is not expected to do well under future climates, not because it is poorly adapted to shifts in climate regimes, but rather because it is currently experiencing major declines from the exotic disease that preclude its immediate regeneration in future burned areas. Moreover, these declines from WPBR and MPB have served to reduce whitebark pine populations to severely low levels and now the nutcracker is acting more as a seed predator than a seed disperser. Climate shifts will only exacerbate this decline and complicate restoration efforts. Make no mistake; this species can thrive under future climates providing that there are extensive restoration efforts to overcome the devastating effects of the WPBR exotic epidemic. Whitebark pine is at great exposure to any climate changes because of its (1) confined distribution to the upper subalpine environments, (2) severely depressed populations, and (3) lack of an ability to regenerate when populations are low because of nutcracker and squirrel predation. However, the species has the genetic capacity to overcome both WPBR and new climates and be able to thrive over the next century, but only with extensive restoration efforts. The magnitude of climate effects will be quite high because climate change is occurring with a major WPBR outbreak. And, the likelihood of these effects has a low uncertainty, mainly because of the role that WPBR will play in the health of whitebark pine forests.

Restoration is the only course of action for managing whitebark pine ecosystems. The anthropogenic-caused loss of a major ecosystem is irreversible: with it goes tremendous biodiversity, ecosystem services, and ecosystem function, seriously impoverishing our biological heritage. Restoration will include the implementation of strategies that hedge the effects of climate warming on whitebark pine ecosystems. However, the high uncertainty inherent in most current climate and ecosystem models may limit predicted distributional shifts that are extremely coarse-scaled and should not be used as justification for a “no restoration” response, especially considering the resiliency exhibited by whitebark pine over time and across its range. We must use the best information available and the most efficient restoration approaches in our toolkit of restoration techniques. We also need to educate and recruit new generations of managers and researchers, as well as new generations of agency administrators and other government officials, so that they understand the value of restoring these ecosystems and the rich biological heritage we hope to leave for future generations.

Hansen AJ, Phillips LB (2015) Which tree species and biome types are most vulnerable to climate change in the US Northern Rocky Mountains? Forest Ecology and Management 338:68-83

Morris MS, Kelsey RG, Griggs D The geographic and ecological distribution of big sagebrush and other woody Artemisia in Montana. In: Proceedings of the Montana Academy of Sciences, 1976. pp 56-79